« A voice that rises like a prayer, touches our souls and transcends this world ».

That is how the parishionersof Saint Thomas Aquinas, and all those who have attended his services, describe the voice of Father Naoum Khoury.

This voice from the Land of the Cedars brings Christmas tidings in an exceptional new album that is at the crossroads of Eastern and Western musical tradition.

Father Naoum Khoury received his early education in Beirut from the Institute of the Brothers of the Christian Schools. Drawn to music from an early age, he discovered a natural talent and nurtured it by singing solo in services and celebrations at Notre Dame secondary school. Music and singing were the path that led him to God.

In 1992, at 21 years of age, Father Naoum started preparing for the priesthood at the Holy Spirit University of Kaslik, where he studied theology and musicology. He also received musical training at the Lebanese National Higher Conservatory of Music in Beirut. Soon he was giving concerts in liturgical and classical music throughout Lebanon.

Father Khoury was ordained in 1998. In 2000, he came to Paris to continue his studies in musicology, specialising in Maronite sacred music from the 4th century to modern times at the Sorbonne (Paris IV). He also practices voice at the French National Conservatory.

The Church has always sought to awaken children to the Faith, offering each an opportunity to meet Christ personally and live his faith to the fullest. Music is often a stepping stone on the road to this awakening, as it was for Father Naoum from his childhood days.

When asked what message this new album, Noël à l’Enfant, has to give the world today, Father Naoum responds first by thanking God for this opportunity to breathe life into a project close to his heart. He also thanks the parishioners of Saint Thomas Aquinas for their support and encouragement. Father Naoum is particularly grateful to Guy Touvron, Naji Hakim and Jean-Philippe Bec, three musicians whom he holds in the highest esteem. It was they who convinced him that his voice could be a messenger of the Good News. He is grateful to them and to his friends for their support in making this recording a reality.

This is what Father Naoum Khoury told about his new album :

« This album, “Noël à l’Enfant”, is especially dedicated to all the children of the world. The words of the first track, which give the album its title, sums up my message: « It is for the Child whose birth fills our homes with Joy, brings Hope to all those who suffer, and glad tidings to cheer our hearts.”

Having grown up in Lebanon, I have known the horrors of war. Hunger and fear are no strangers to me. Christmas was a source of joy and hopefor me and my family.

It is this joy and hope that I now wish to pass on to all those who suffer in the world with these Christmas songs sung in nine different languages. My hope is to touch the hearts of Christians who pray in these languages, and bring peace and joy to children and to all those in whom the holy Child lives.»

The choice of songs and their tonality in this recording is intended to offer a wide range of tone and instrumentality. Each piece begins in a different key to highlight the diverse qualities and registers and colours of Father Naoum’s tenor voice. 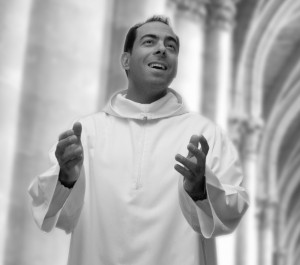